Time Magazine’s “Person of the Year” Is Elon Musk 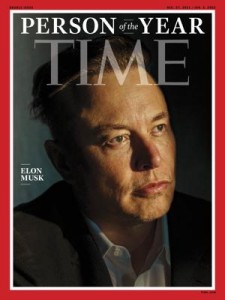 This photo provided by Time magazine shows Elon Musk on the cover of the magazine’s Dec. 27 – Jan 3 double issue announcing Musk as their 2021 “Person of the Year.” (Time via AP)

NEW YORK — Calling him a “clown, genius, edgelord, visionary, industrialist, showman,” Time magazine has named Tesla founder and CEO Elon Musk as its Person of the Year for 2021.

Musk, who is also the founder and CEO of the space exploration company SpaceX, is estimated to be the richest person in the world with a net worth of around $300 billion.

Tesla shares have risen about 60% in the past year, helping Musk to pass Amazon founder Jeff Bezos as the world’s richest person.

With a market value around $1 trillion, Tesla is by far the most valuable car maker in the world.

Dec 14, 2021Leave a Comment on Time Magazine’s “Person of the Year” Is Elon MuskUncategorized