‘This World Was Too Harsh For Him’: Mother Of Mooresville Teen Who Ended His Life Speaks About Days Leading To His Death


MOORESVILLE —  A Mooresville mother reflects on the last few days of her son’s life.  17-year-old Mario “Nathan” Lopez took his own life one week ago at Mooresville High School.

Suicide is an uncomfortable conversation to have with your child.  But, Lopez’s mother say it’s an important one.  Ashley Lopez says Nathan struggled with anxiety his entire life.  She says it began when he was in third grade, and he learned about the shooting at Sandy Hook Elementary School.  His mother says from that day on Nathan was home-schooled until his sophomore year in high school.

“He’s been hospitalized for mental illness.  He went to therapy every sing week since 2019.  I honestly think that the world is just too harsh for him.  He was so kind.  The evil that is in this world was too much for his heart to bear,” says Ashley Lopez, Nathan’s mother.

This year, Nathan was back in school, and was a thriving junior.  His mother says November 10th started off as just a normal day, until several of his friends began to receive goodbye messages from him.  A fellow student found his body at Mooresville High. 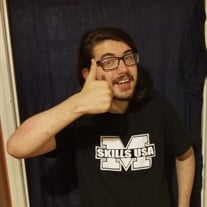 MOORESVILLE, N.C. — A Celebration of Life for Mario “Nathan” Lopez will be held on Sunday, November 14, at 2 p.m. in the Mooresville High School Stadium off Magnolia Street. The service will be open to everyone in the community.

Lopez, who was a student at Mooresville High school, passed away on Wednesday, November 10.

If you have been touched by Nathan’s passing or been affected by mental illness, the family encourages you to attend.

For those who are unable to attend the Celebration of Life, you may go to the following link for the live stream https://www.facebook.com/CavinCookFuneralHomeServices/

Nov 18, 2021Leave a Comment on ‘This World Was Too Harsh For Him’: Mother Of Mooresville Teen Who Ended His Life Speaks About Days Leading To His DeathUncategorized