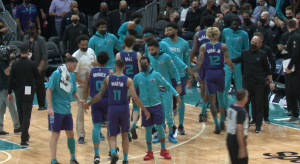 Dennis Schroder had nine of his 23 points in overtime, and Robert Williams added 12 points and 16 rebounds in a game that featured 28 lead changes.

Miles Bridges had 25 points and 10 rebounds and LaMelo Ball added 25 points on seven 3-pointers and nine assists for Charlotte before fouling out in overtime. Kelly Oubre added 19 points for the Hornets, who were seeking their first 4-0 start as a franchise.