Reducing energy use at the Charlotte Library 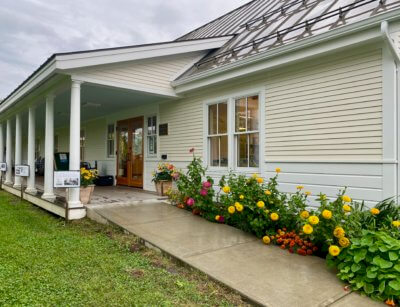 Entrance to the library. Photos by John Quinney.

The Charlotte Library was built in 1997 with a least first cost approach. The 2,650 square foot building was air conditioned in summer, and in winter, heated with oil that was stored in an underground tank. While relatively inexpensive to construct, such buildings often have higher operating costs than energy efficient alternatives.

In 2014, the Charlotte Energy Committee worked with GWR Engineering on a Library Modeling and Net Zero Roadmap project. GWR determined that the main opportunities for reducing energy use were to replace the heating system, eliminate drafts and air leaks, improve ventilation and upgrade lighting. In addition to a roof upgrade (described below), GWR recommended: replacing the oil-fired heating system with heat pumps, reducing air infiltration by sealing gaps around windows, doors and specific locations identified in blower door testing, improved lighting controls and additional LEDs, and installing an energy recovery ventilation unit. If implemented, GWR’s proposals were expected to cut the library’s energy use by 65 percent.

In 2015, the town hired Ellis Construction to replace the asphalt shingled roof with a standing seam metal roof and to replace fiberglass batt insulation with spray foam. The results were quite impressive.

For the four-year period ending in June 2015, the library used an average of 1,300 gallons of heating oil a year, adjusted for average winter weather. Electricity use was 20,000 kWh a year. At today’s prices for heating oil and electricity, the library’s total energy bill averaged $7,400 a year, or $3.51 per square foot.

For the four years after the roof improvements, the library used an average of 870 gallons of heating oil a year, adjusted for average winter weather. The library’s total energy bill was reduced to $6,150 a year, or $2.92 per square foot, which amounts to a 17 percent improvement.

In 2018, the library’s staff and board began planning a 2,200 square foot addition to the library, a project that also included renovations and upgrades to the existing structure. According to library director Margaret Woodruff, the northern section of the library and the children’s area were sometimes a bit chilly during the winter. In summer, the mezzanine was often hot and stuffy. 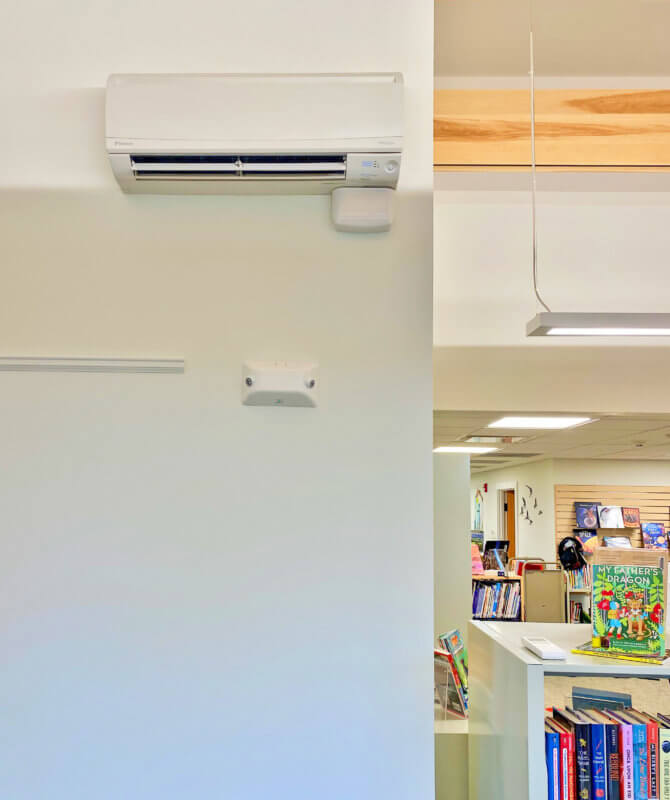 Heat pump in the children’s room. Photo by John Quinney.

In April 2019, the town issued a Request for Bids for the library addition. The energy committee worked with the Library’s Building Committee to require that the finished structure would minimize energy costs and attain Efficiency Vermont’s “High Performance” designation for commercial buildings. This would require heat pumps to meet total heating and cooling needs, air-sealing and insulation in all building walls, high performance windows (with a U 0.25 rating), and a roof-mounted solar system sized to meet the building’s total energy needs.

The energy committee focused on the solar system for the library roof working with the library board, the Selectboard and Leigh Seddon, an experienced solar designer, to develop a Request for Proposals. Green Lantern Solar was selected to finance and install the system. The economics were attractive with a six percent return on investment if the town exercised its option to purchase the solar system for a discounted price after five years. Unfortunately, the State of Vermont’s fire marshal rejected the array design. In his judgment, covering the entire upper west-facing library roof with solar panels would not allow firefighters access in the event of a fire (there were no solar panels proposed on the entire east-facing roof). Removing panels to meet the fire marshal’s requirements made the project uneconomic, and so, reluctantly, the energy committee and library board abandoned the library solar project and the goal of a net zero building.

In spring 2019, the Selectboard chose the ReArch/Bellweather Architects team to complete the expansion project using a design-build model promoted by then-board member Fritz Tegatz. The library and town were extremely fortunate that Fritz served as the project’s construction manager, donating countless hours to help ensure that construction and commissioning was completed on schedule and within budget in March 2020.

As part of the design build process, ReArch modeled the building’s energy use. They calculated that the new 4,800 square foot library would use 34,000 kWh of electricity and cost $6,200 a year for heating, cooling, lighting and ventilation. This corresponds to $1.30 per square foot.

Margaret Woodruff reports that the new building feels tighter and less drafty than the old structure. The heat pumps performed flawlessly last winter, keeping the entire library warm and comfortable. During this summer’s hottest days, the heat pumps were used as air conditioners, keeping room temperatures cool and comfortable. Plans are in the works for informational signs to describe the workings of the library’s energy saving features.

Thanks to donors to Friends of the Library and the town’s taxpayers for providing the funds that made this project possible.

John Quinney is Publisher of The Charlotte News and President of the Board of Directors. He and Bill Kallock are former members of the Charlotte Energy Committee.

Sep 23, 2021Leave a Comment on Reducing energy use at the Charlotte LibraryUncategorized