The University of North Carolina Press will publish The Vote Collectors, by Charlotte journalists Michael Graff and Nick Ochsner, on Nov. 16. The surface story is familiar to anyone who paid even cursory attention to North Carolina politics in 2018 and 2019: The Rev. Mark Harris, then pastor at First Baptist Church in Charlotte, initially appeared to have won a close victory over Democrat Dan McCready for the Ninth U.S. Congressional District seat—a key victory for Republicans in the 2018 “blue wave” midterms.

But the State Board of Elections eventually ordered a new election after months of public revelations about an extensive absentee ballot-harvesting scheme based in rural Bladen County and overseen by a roguish, chain-smoking election consultant and felon named McCrae Dowless. The new election, in September 2019, sent former Mecklenburg County commissioner and state senator Dan Bishop, a Republican, to Washington; Dowless faces state charges related to the scheme and could stand trial before the end of the year.

In The Vote Collectors, that scandal—which made national headlines for months—is secondary to a more comprehensive examination of its historical, economic, and political antecedents in Bladen County and oft-forgotten eastern North Carolina. Graff, editor of Axios Charlotte and former editor of this magazine, and Ochsner, the chief investigative reporter at WBTV, lived in the area long before 2018; Ochsner grew up near Fayetteville. That familiarity helped the two develop a continuing relationship with Dowless as a source and contextualize the Ninth District scandal—it was just one episode in an old and ongoing story about race, power, money, and the ground, less stable than we’d like to imagine, on which our electoral systems rest.

The authors unfurl the story in three parts: a deep probe into the history of post-Civil War eastern North Carolina sandwiched by more recent developments in Bladen County, leading up to and after the 2018 election. I interviewed them together in mid-August. Their answers have been edited for space and clarity.

Charlotte magazine: How did the book project start?

Graff: All of Part II of our book—I’ve always wanted to write that anyway because I love eastern North Carolina. I mean, it has such a rich history. I knew he had all this stuff for parts I and III, basically, that nobody else had. I was like, All right, I think we can make this work. And plus, everybody thinks I’m a liberal journalist, and everybody thinks Nick’s this conservative Republican lover now because he was working with McCrae Dowless in secret or something, and I was like, In this polarized world, maybe somebody who’s thought of as a raging liberal and somebody who’s thought of as a Republican could write a book together and be bulletproof in some way.

Charlotte magazine: How did the partnership between the two of you work?

Ochsner: We mesh and kind of do the yin-yang thing in different ways. Mike went on reporting trips down in Bladen County with me and sat in the room with some of the folks I’d been developing for a while. The book—which I’m very proud of and I think turned out really well—is the product of two complementary skill sets that Mike and I have. I generally describe it as, you know, I’m the rough carpenter putting up the walls and Mike’s the finish carpenter coming along and making everything beautiful. … And we’re still friends after writing 95,000 words. So, I mean, there’s that.

Charlotte magazine: One thing that’s really striking about the book is its strong sense of place—the physical landscape of eastern North Carolina is almost like its own character in the narrative.

Ochsner: It was important to me that we take readers, to the extent we could, physically to the place. Because even if you live in Charlotte, which is a couple-hour drive away, Bladen County is a different world. To understand the story we’re telling, you have to understand the place we’re telling it in.

Charlotte magazine: Speaking of Part II, the history section, what’s your perception of the thread that runs from that history, especially its racial components, to what happened in Bladen County in 2018? 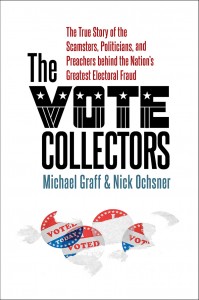 Graff: Bladen County is an exurban county to Wilmington. Wilmington would be the largest city, I think, in the South right now had Wilmington in 18981 not happened, and Bladen County could be the size of Union County right now. Instead, it’s a dying county. I firmly believe, and I think we tried to prove throughout, that the incredible exodus from Wilmington after 1898 was something that set that city back 100 years, and it also set the surrounding areas back 100 years. … I think the connections are hopefully pretty clear. Like you can jump only one, two, three steps, and all of a sudden you’re going from 1898 to 2018.

Ochsner: And before 1898, really. The thing I’m actually the most proud of about the book is that we draw a straight line from Reconstruction in the 1800s to what happened in 2018. Race is important to talk about in the book, because race dominates everything in Bladen County, amongst Black people and white people. I mean, it’s just uncomfortably still in the air in a way that I don’t think it is in a lot of other places. So to understand the politics and what happened in Bladen County in 2018, you have to understand the history of racial tension that dates back more than a century.

Graff: Certainly the two competing organizations that created the scandal of 2018, the McCrae Dowless-led organization and the Bladen Improvement Association2, were direct products of all of that history. The Bladen Improvement Association, first and foremost, was formed, like many of these Black political action committees, as an organization that was necessary to get people into office. And like with almost everything we see in politics, for every action, there’s an opposite reaction. And McCrae Dowless was the opposite reaction. He was a product of some flagrantly racist people who had more money than he did and were using him to make sure that white people didn’t lose the sheriff’s office3. … It certainly created the pond that these two lily pads were sitting on, and those two lily pads are the story. It’s not Dan McCready and Mark Harris. It’s those two organizations.

Charlotte magazine: Nick, you in particular had and have extraordinary access to McCrae Dowless, whom you freely admit is a kind of con artist. What kind of conversations did you two have with each other, and even internally, about making sure you didn’t get snowed by this guy?

But I think we were cognizant of—anytime you have access to anybody, they’re giving you that access because they think they’re getting something out of it. So what I didn’t want to be was the guy pushing the skewed perspective in a vacuum without any context. … But at the same time, journalists make sources, and sources are vital to storytelling. And I also think that McCrae Dowless and his people were a source that no one else had and still don’t have.

Charlotte magazine: Was what happened in Bladen County in 2018 a one-shot, perfect-storm situation, or was it a product of a particular history, or was it a harbinger of an increasingly dysfunctional democracy, or was it somehow all of that?

Graff: I do think that the more economically disadvantaged, far-flung places you have, the more chance for people who have a ton of money, as political campaigns get more and more rich, to come in and spend—like, what the Mark Harris campaign spent in Bladen County is very little money to them. It’s a shitload of money to people in Bladen County.

Ochsner: The more economically destitute people get, the more isolated people feel, the more they’re going to be willing to do things that maybe they wouldn’t otherwise. And I think that’s dangerous for democracy.

Charlotte magazine: You quote the late Congressman and civil rights leader John Lewis: “What happened in Bladen County is a disease. A disease that, if it’s not cured, can infect a country.” What’s the disease?

Ochsner: It’s a couple: Greed. Polarization in our politics. That’s definitely on display in Bladen County, and it’s only gotten worse since 2018.

Graff: I don’t want to zoom out and get too philosophical with it, but power has got to be the larger disease. People want it. People want to know the sheriff that they have, you know, to be able to say, “Well, my son did this, but I can call the sheriff.” And it just balloons when you go larger and larger in politics.

Charlotte magazine: What would you hope readers, especially in this state, take away from the book?

Graff: I just hope they care about rural parts of the state. I’ve always hoped that people in Charlotte would give more of a shit about places that are outlying and quit stereotyping these places. We use the word “rural,” and people automatically assume that everybody’s just a white hillbilly, and it’s so not the case in eastern North Carolina.

Rural eastern North Carolina is Black and white people desperately trying to get some joy out of this life, and fighting to get it. I hope a few people come to care about this place a little bit more and maybe want to help it out—but also that they come away with a deeper understanding of North Carolina and how we got to where we are.

Greg Lacour is the senior editor of this magazine.

1On Nov. 10, 1898, a white supremacist mob overthrew the elected, biracial city government in Wilmington. It remains the only coup d’etat ever on American soil.

3In 2010, Dowless worked for Eric Bryan, a candidate for sheriff in the Democratic primary against Prentis Benston. An extraordinarily heated race resulted in a narrow victory for Benston, the first Black sheriff in Bladen County history.