The south wind blows and the ridgepole of the old one-room camp creaks above our heads. We are on the shores of mid-Lake Champlain. With the window slightly cracked open, we can hear the waves lapping against the rocky shoreline. Beyond the polished stones lies the bay, the outline of the islands with the Adirondacks looming in the dark background. Inside the cabin, a Vermont Castings Vigilant woodstove burns the last of the spirits of the beech that had fallen outside the west window last winter. Blue-green and orange flames tongue the remaining log, digesting its pulp in a flurry of whistling air. I am sitting in the old Kennedy rocking chair sipping my Lapsang Souchong tea that reminds me of a childhood spent longing for moments like these. We are winding down after a dinner of roast duck, acorn squash and late-picked green beans from the garden. An empty bottle of hearty merlot stands on the table in the center of the dining area, a testament to a culinary stroke of genius. We revel in the silence of the crackling fire and the wind whistling around the old green door with the crack in the center. Tomorrow is the opening day of the second half of duck season on the lake. 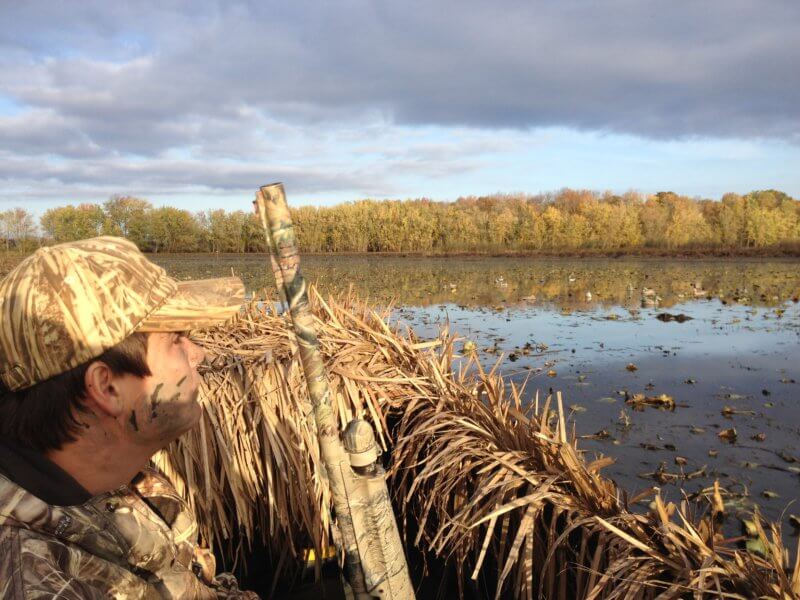 Zack Gregory in the blind. Photo by Bradley Carleton.

The dishes are done, I am showered and ready for the rack. In the corner of the room is my bunk, made of crude 2x4s and plywood, with a mattress and an old Hudson’s Bay six pelt blanket doubled over and neatly tucked into the slats beside the hemlock wall. The small oil lamp glows yellow in the corner over the dining room table, casting an arc of warm light on the ceiling. “I’m gonna hit the sack. Three a.m. comes early ya know,” I declare. Within minutes I am in the astral channel of unconsciousness and bliss.

The old Big Ben alarm rings loudly, interrupting my dreams of mallards flying perilously close to my blind. It is rude, but effective. There is no drifting back to sleep after the ear-shattering ring of Big Ben. I roll over, groaning, as my feet hit the cold plywood floor. I shuffle quickly over to the woodstove and throw another log on the searing embers. It catches and within minutes is radiating a new warmth to the cabin.

Breakfast is underway and the smell of cob-smoked bacon permeates the room. Steel-cut oatmeal is bubbling away on the back burner of the old gas stove. French roast coffee is popping in the tin percolator. We fill our bellies with the best breakfast of the year and pull on our camo gear. The walk to the canoe is a short one—maybe 100 yards. The south wind has switched around to the north and the sky has cleared into a starlit pre-dawn.

In the shadow of a waning crescent moon, we pull the old Mansfield canoe up into the weeds of the swamp. The wild rice stalks rise seven feet above us as we step into the primordial ooze, which releases the vapors of decaying vegetation and assaults our noses with its putrid fragrance. Only a duck hunter can love these smells. We set out the plastic deceivers in the middle of the channel that is choked with smartweed and wild celery. The decoys bob gently in the breeze, spinning from side to side as if they were real birds searching for seeds.

We trudge back to the canoe and drape the tall sedge grasses over the gunwhales. Then we retreat into the puckerbrush and saplings of the shoreline 20 yards away. Behind us, to the east, the sky begins to brighten reluctantly and the moon shadows fade over the slough in front of us. Whistling wings can be heard every few moments.

Finally a loud “qwaaaack!” breaks the silence of the dawn, and the south end of the swamp erupts in a flurry of beating wings. The swamp comes alive and we are surrounded by the sounds of air being flushed over the mighty pinions of ducks. Greenwing teal buzz the decoy spread. Big winged mallards vocalize their raspy guttural calls. The whining “wooo-eeek” of wood ducks whistles throughout the riparian haven. I check my watch. Six-thirty a.m. Two more minutes until legal shooting.

Birds are dive-bombing the decoys and swimming around trying to determine why all these other ducks are not talking to them. Seconds later, they realize they have been duped by the plastic imposters and depart with a loud squeal of disdain. The last two minutes feel like an hour. A distant shot from far south alerts us that it is time.

We stand up behind our wall of grass and look down both sides of the channel. I whisper excitedly, “Incoming triple at two o’clock,” which in avian lingo means that a group of three birds is approaching the spread at the angle of the watch just to the right of straight out (which is noon). I give one raspy grunt on my drake whistle and the birds suddenly lock their wings and drop their feet, swinging from side to side as if they were small fighter jets looking for a landing on an aircraft carrier. The three mallards begin to backpedal, beating their powerful wings in a forward motion to slow them down directly over the center of the decoy spread. As their feet reach out to make a landing, I call the shot.

We rise in unison and our guns bark out their deep percussive tone. Two large drake mallards lay belly-up in the water. Simultaneously, we notice that on the legs of both birds there are affixed two shiny aluminum bracelets, known as “bands” to waterfowlers the world over. These are trophy birds—ones that have been caught and banded by biologists.

We retrieve them with alacrity and, once back in the blind, admire the extraordinary iridescent sheen on their green heads, the perfectly mottled herringbone pattern of their flanks and their magnificent auburn breasts. The wing speculum is as though an artist had painted a perfect shade of deep blue and outlined it in white.

These are spirit birds. They have been given to us to love, admire and to nurture our souls. We drink in their beauty and praise their grace. These birds will be served to our families on the coldest, darkest nights of the winter, when we will regale our guests with the story of how they came to our prayers.

Bradley Carleton is Executive Director of Sacred Hunter, a non-profit that seeks to educate the public on the spiritual connection of man to nature.

Oct 7, 2021Leave a Comment on Opening day of duck seasonUncategorized