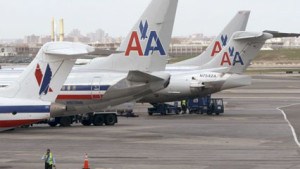 American Airlines canceled 900 flights across the country Sunday, 254 of those are in or out of Charlotte.  According to Flight Aware, Charlotte Douglas is the second most impacted airport for departures and arrivals.

Passengers shot video of airport terminals in Miami and Dallas Fort-Worth as customers scramble to get to their destinations.  Some people say they waited up to 8 hours in a line to rebook their canceled flight.  American claims most passengers are being rebooked on flights departing the same day.

CHARLOTTE, N.C. – Major issues at several airports across the country, including Charlotte, after American Airlines cancels hundreds of flights.

According to Flight Aware, the airline has 61 canceled flights at Charlotte Douglas Airport, along with 39 delays, as of Saturday afternoon.

American says severe winds at its Dallas-Fort Worth hub forced it to cancel 342 flights on Friday.

The ripple effect carried into Saturday afternoon, canceling another 434 flights.