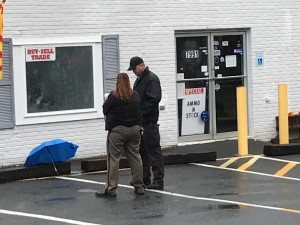 Deputies received a call around 10:15 a.m. from an off-duty officer about an armed robbery that had just happened at Mount Pleasant Sporting Goods and Pawn Store, located on West Franklin Street, in Mt. Pleasant. The sheriff’s office learned from the call that two or more subjects entered the store and at least one of the suspects shot the store owner in an attempt to rob the store.

As the suspects left the store, the off-duty officer, hearing and seeing the events unfold, used a personal weapon to return fire at the subjects who fled and left the scene, according to deputies.

Officials believe they have all subjects in custody. The store owner was transported by ambulance to the hospital to treat their shooting injury.

The North Carolina State Bureau of Investigations was contacted to conduct an investigation into the officer’s actions and the Cabarrus County Sheriff’s Office will conduct the investigation involving the robbery and shooting of the store owner.