CHARLOTTE, N.C. — The Mecklenburg County Sheriff’s Office is investigating after three detention officers were assaulted by an inmate on Tuesday.

Authorities say on November 2nd two Direct Action Response Team (D.A.R.T.) Officers and a Detention Sergeant at the Mecklenburg County Detention Center were injured during an incident with 39-year-old Eric Henderson, a resident housed at MCDCC.

Around 8:45 p.m., D.A.R.T. Officers Simpson, Huff, and Sergeant Clyburn were attempting to move Henderson to a disciplinary detention unit when he refused to comply with commands and stabbed Officer Simpson with “homemade weapons.” 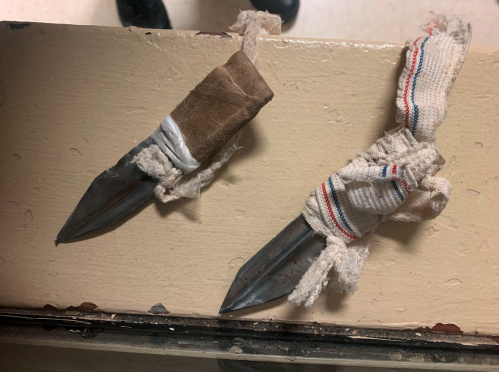 Authorities say Officer Simpson was treated by detention facility medical staff before being taken to a local hospital and released.

Police say Officer Simpson’s injuries were not life-threatening, and both D.A.R.T. Officer Huff and Sergeant Clyburn received minor injuries during the incident.

“As soon as I was alerted of the incident, I went to the hospital and stayed with two of the officers until they were released. Both are in good spirits and eager to return to work,” says Sheriff Garry L. McFadden. “I do not take these incidents lightly and will continue to take the necessary measures to ensure the safety of detention center staff and residents who are housed in our care.”

Sheriff McFadden called a mandatory meeting with the detention center staff on Wednesday to discuss the assault.

McFadden says it was determined during the meeting that a breakdown in communication and lack of adhering to protocol could have contributed to the assault.

“We have experienced staffing shortages due to the COVID-19 Pandemic and our detention officers have been tasked with working overtime,” says Sheriff McFadden. “Many residents have not seen their family members in-person since 2019, in addition to missing court dates and minimal movement inside the housing unit. These factors have put a strain on the agency and its operations, but we will continue to address and adjust our operations as we have done since the onset of the pandemic.”

At the end of the meeting, McFadden issued a directive for detention Captains to create an updated standard operating procedure for moving residents to disciplinary detention units.

On Friday, October 29th, detention center staff committed more than 80 staff members to conduct a 12-hour safety and security check of the facility.

“Unfortunately, we know that no matter how swiftly we act to search our facilities for weapons or contraband, residents can recreate these items in less than 24 hours,” said Sheriff
McFadden.

Since Tuesday’s incident, detectives have charged Henderson for Assault with A Deadly Weapon with Intent to Kill, Assault Causing Physical Injury, and Aggravated Assault of a Police Officer for his involvement.