In 2015, a 25-year-old man was walking to work at a Randolph pizza place, taking a shortcut down the railroad tracks.

Kevon Kenyon was listening to music on his headphones and didn’t hear the train that was running late. He was killed.

Officials, tasked by Amtrak with spreading information about how train tracks in Charlotte and Shelburne are even more dangerous now as regular passenger service is returning for the first time since the 1970s, spoke to the Champlain Valley School District board meeting on Tuesday, March 15. 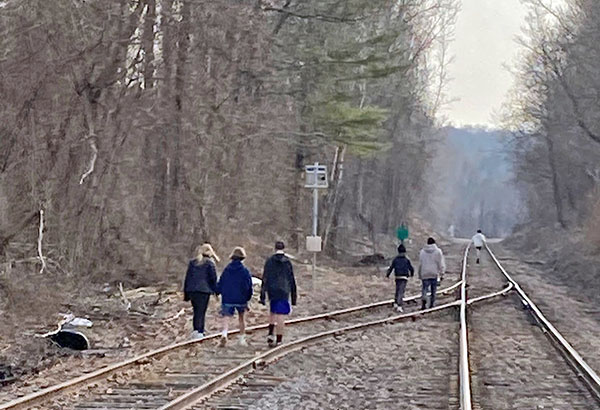 The officials had chilling evidence of the immediacy of the danger. On the Friday before, train employees had taken a photo of six children “lackadaisically strolling” on the tracks near Shelburne Community School.

The test runs present an unpredictable and dangerous situation because the test runs could come at any time.

Too many people in the area appear to have a “casual outlook toward train safety,” said Toni Clithero, who works with Amtrak for the Vermont Agency of Transportation.

In a phone conversation, Clithero mentioned a social media post the agency made trying to heighten public awareness about the danger of walking on the tracks. A disturbingly large number of online commenters ridiculed the warnings, sharing memories of playing on the tracks, walking to school, riding bikes, ATVs, snowmobiles and getting off the tracks if they heard a train.

“About every three hours in this country a person or vehicle is struck by a train,” Amtrak detective Rob Hanson said. “There are three to five incidents a day in the U.S.”

In spite of people’s naively heartwarming memories of hanging out on the railroad tracks, it’s more dangerous now because trains are faster and quieter. 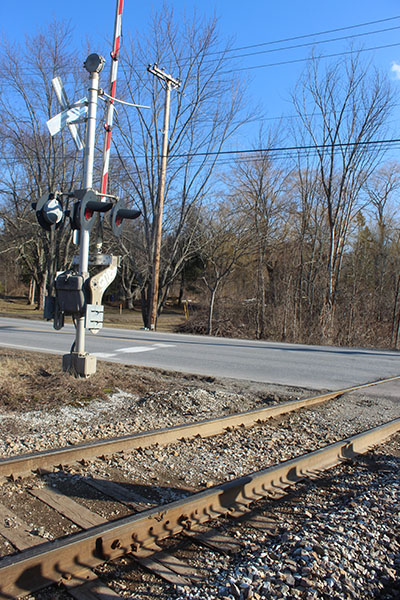 People may be remembering a time when trains stopped at many road crossings and may have been just traveling at 10 mph, Hanson said.

Trains will be regularly coming through Charlotte and Shelburne at 59 mph around 9:30-10 morning and night.

If an engineer realizes there is something on the tracks, they only have one strategy — trying to stop. Trains can’t swerve; the best thing the engineer can do is put a train into an emergency stop, Hanson said. “A train going 59 miles an hour is going to take about a mile to stop.”

The danger is already here and unpredictable with Amtrak running as many as five test runs a day at a variety of times. “The time to get safer around the tracks is now; the train is here,” Clithero said.

The danger is also increased because today’s trains are so much quieter.

People with nostalgic memories of jumping off the tracks when they heard a train approaching are remembering the segmented rails of the past. Now, rails are welded in stretches that can be solid for more than a quarter of a mile. The old rails made a clickety-clack sound as wheels hit the different rail segments, Clithero said.

Railroads in Vermont can be dangerously seductive because they often are very rural and inviting.

“We have some tragic cases across Vermont where decisions that are made in a split second have shattered communities. And shattered families,” Hanson said.

And shattered railroad employees. The “Claims Journal” has an article about the trauma these employees suffer as the result of fatal accidents. It tells the story of William Smith, who was a conductor when he saw and heard his train hit a young woman.

Smith said he imagined somehow being able to save a woman in the seconds before the train impact. Then he saw and heard the woman hit with a sound he described as “a clong.”

Years later, every time he hears a similar sound, he is mentally snatched back to re-experience the hopeless helplessness of that tragic day. He told the publication, “She probably has friends and family who don’t think about her as much as I do.”

School board member Brendan McMahon raised concerns that, with the tracks about 200 yards from Shelburne Community School, the noise of the trains might disrupt classes there.

Hanson said the trains are not like the F-35s in Williston — the danger is that passenger trains are so quiet now.

“While having new trains running through a community is a wonderful thing for everyone, there are inherent dangers around the railroad tracks when they’re newly placed back into service,” Hanson said.

At every railroad crossing there is a blue sign with white lettering with information about how to get in touch with Amtrack and the number of the crossing. That’s how a train can be stopped right away.

One of the things Hanson said he works to teach older kids of driving age and adults is that, if their vehicle gets stuck on railroad tracks, the first thing to do is get out of the automobile and get away from the tracks.

Amtrak encourages people to stay at least 15 feet from the tracks.

“If you see something suspicious or you see a vehicle stopped on the tracks, that should be your first call,” Hanson said, imploring for people to call that number before 911 because that call goes directly to the train dispatcher controlling the line who can stop a train within 20-30 seconds.

But with more new service to more communities, the issue of safety becomes more important.

In his 13 years with Amtrak, Hanson said there have been over 165 fatalities.

And on Thursday, two days after the school board meeting, there was another one — a person was struck and killed on the Ethan Allen Express tracks north of New York City.